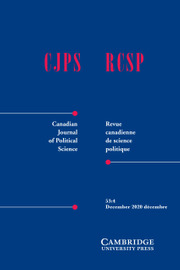 Maxime co-authored a paper that is forthcoming in the Canadian Journal of Political Science. The paper, entitled “Fulfilling Campaign Promises or Following Public Opinion: Does the Size of the Majority Matter?” uses the data from an experiment that was conducted collectively with undergraduate students enrolled in Prof. André Blais’ course on experiments.

We perform a survey experiment on the issue of immigration. People are presented with a situation where public opinion is at odds with the election promise. In our control group, no information is given about public opinion. In the treatment groups, respondents are told that 55 per cent or 80 per cent of the people are against the project. When respondents are informed about the election promise but are not told about public opinion, 64 per cent say that the party should fulfill its promise. That percentage drops to 51 per cent when people are informed that a slight majority (55 per cent) are opposed to the project and to 42 per cent when they are told that a strong majority (80 per cent) are opposed. Citizens thus believe that politicians should pay attention not only to the majority view but also to the size of that majority.

You can access and read the full article here.