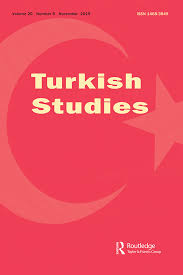 A new paper by Semih Çakır is now available online in Turkish Studies. In this article, the author investigates the role of partisanship in Turkey during the 2011 and 2015 general elections. The paper is available here.

Abstract: A vast literature demonstrates that partisanship has a stabilizing impact on politics, as it limits electoral volatility. Recent studies have also shown that polarization increases partisanship, thus contributing to electoral stability. Focusing on Turkey, an unconsolidated and highly polarized democracy, this study investigates the role of partisanship in a comparative context by means of data from the Comparative Study of Electoral Systems project. I find that Turkey (among more than 40 countries) is a very high-partisanship country, where partisanship greatly shapes the evaluations of short-term determinants of vote and the vote itself. This research also shows that partisanship in Turkey is associated with very low electoral volatility and defection rates. Moreover, the degree of identification also plays a significant role in its impact on volatility and defection. These findings from the Turkish case offer insights and stimulate a new normative debate on the role of partisanship in unconsolidated democracies.

A limited number of free copies are available here.