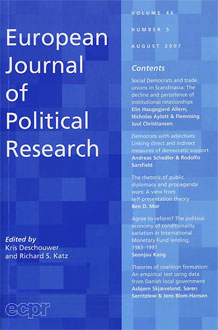 Scholars have investigated the characteristics of volatile voters ever since the first voter surveys were carried out and they have paid specific attention to the role of political sophistication on vote switching. Nevertheless, the exact nature of this relationship is still unclear. With increasing volatility over the past decades this question has furthermore grown in relevance. Is the growing unpredictability of elections mostly driven by sophisticated voters making well-considered choices or is the balance of power in the hands of unsophisticated ‘floating voters’? Several scholars have argued that even under conditions of increasing volatility switching is still mostly confined to changes to ideologically close parties. Most researchers, however, have used rather crude measures to investigate this ‘leap’ between parties. To advance research in this field, this article directly models the ideological distance bridged by volatile voters when investigating the link between political sophistication and volatility. This is done using Comparative Study of Electoral systems (CSES) data that encompass a broad sample of recent parliamentary elections worldwide. Results indicate that voters with an intermediate level of political knowledge are most likely to switch overall. When taking into account the ideological distance of party switching, however, the confining impact of political knowledge on the vote choices made is clearly dominant, resulting in a linear decrease of the distance bridged as voters become more knowledgeable.