A Spiral of Distrust 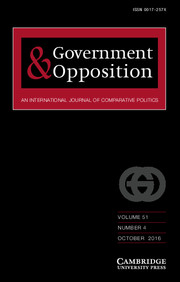 Low levels of political trust are associated with a preference for protest parties. Some authors have argued that in this manner protest parties indirectly contribute to the stability of electoral democracy, functioning as a ‘safety valve’ for political discontent. In this article, we investigate the relationship between protest voting and political trust in a dynamic perspective, relying on a five-year Belgian panel study. We confirm that citizens with low levels of political trust are more likely to vote for protest parties. Additionally, we point out that decreasing levels of trust significantly increase the probability of voting for a protest party, even controlling for absolute levels of trust. Most importantly, having voted for a protest party in 2009 is linked to a subsequent further drop in political trust during the 2009–14 observation period. The panel analysis suggests that distrust and protest voting reinforce one another, leading to a potential spiral of distrust.